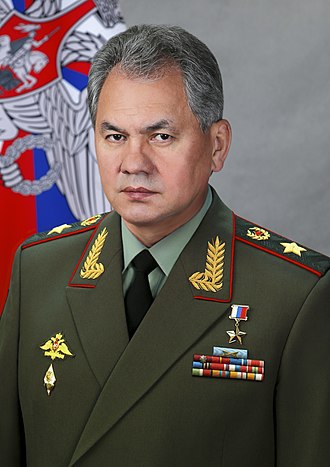 Sergey Kuzhugetovich Shoigu[1][a] (born 21 May 1955) is a Russian politician and General of the Army who serves as Minister of Defence of the Russian Federation and as Chairman of the Council of Ministers of Defense of the CIS since 2012. Previously, Shoigu was Minister of Emergency Situations from 1991 to 2012, and briefly served as Governor of Moscow Oblast in 2012. Shoygu holds the military rank of General of the Army.

Shoigu was born on 21 May 1955 in Chadan, Tuvan Autonomous Oblast, to an ethnic Tuvan father, Kuzhuget Shoygu (1921–2010) and a Ukrainian-born Russian mother, Alexandra Yakovlevna Shoygu (1924–2011), who was a member of the Tyvas People’s Deputy Regional Council. He graduated from School No. 1 of Kyzyl city in Tyva Republic.[2]

In 1977, Shoigu graduated from the Krasnoyarsk Polytechnic Institute with a degree in civil engineering. Following graduation in 1977, Shoygu worked in the construction projects nationwide for the next decade, advancing from low levels to become an executive. In 1988, Shoygu became a minor functionary in the Abakan branch of the Communist Party of the Soviet Union, and then in Komsomol for a few years. In 1990, Shoygu moved to Moscow from Siberia, and was appointed Deputy Chief of State Architecture and Construction Committee of the Russian Federation.[3]

Sergey Shoygu as the Minister of Emergency Situations, 28 June 2002

In 1991, he was appointed the head of Rescuer Corps, which was later given more responsibilities and renamed first to the State Committee on Emergencies, and eventually to the Ministry of Emergency Situations, making Shoygu a government minister. He became popular because of his hands-on management style and high visibility during emergency situations, such as floods, earthquakes and acts of terrorism. In 1999 he became one of the leaders of the Russian pro-government party Unity. He was awarded Russia’s most prestigious state award – Hero of the Russian Federation – in 1999.

On 6 November 2012, Shoigu was appointed Minister of Defence by Putin. According to expert Sergey Smirnov, the so called “Petersburg group” of siloviki (Sergei Ivanov, Sergey Chemezov and Viktor Ivanov) had wanted one of its associates to succeed Anatoliy Serdyukov, but Putin was reluctant to strengthen the clan and opted for a neutral Shoigu.[6]

On 7 November 2012, the minister decided to resurrect the tradition of Suvorov and Nakhimov cadets participating in the 9 May parade. In July 2013 Shoygu ordered commanders to begin every morning in the barracks with a rendition of the Russian Anthem, to compile an obligatory military-patriotic book reading list and take the preparation of demob albums under their control.[7] In August that year he ordered to dress all Defense Ministry civilian workers, other staff and management employees in so-called “office suits”.[8]

In February 2014, Shoigu said Russia was planning to sign agreements with Vietnam, Cuba, Venezuela, Nicaragua, the Seychelles, Singapore and several other countries either to house permanent military bases and/or to house airplane refuel stations in those countries.[9] Since then, only an agreement with Vietnam was effectively signed.[10]

In July 2014, Ukraine opened a criminal case against Shoigu; he was accused of helping to form “illegal military groups” in Eastern Ukraine who at the time fought against the Ukrainian army.[11]

On 30 September 2015, Russia began a military operation in Syria. The operation was carried out by the Russian Aerospace Forces, with the support of the Russian Navy.

Shoygu was reappointed in 2018 (in Medvedev second government) and 2020 (in Mishustin government).

As defence minister, Shoigu on multiple occasions accompanied Putin during week-end breaks that the pair would spend at undisclosed locations in Siberian countryside.[12]

Defender-Europe 21, one of the largest U.S.-Army, NATO-led military exercises in Europe in decades, began in mid-March 2021 and will last until June 2021. It will include “nearly simultaneous operations across more than 30 training areas” in Estonia, Bulgaria, Romania, Kosovo and other countries.[13][14]

On 11 February 2022, he met UK Defense Secretary Ben Wallace. Shoygu denied that Russia was planning an invasion of Ukraine.[15]

Father — Kuzhuget Sereevich Shoygu[16] (1921–2010) (born Shoygu Seree oglu Kuzhuget, his name order was changed because of passport error, according to Tuva official line; more likely he Russified the name from the Turkic oglu “son of…”; such a step showing acceptance of the primacy of things Russian was propitious for one’s advancement), editor of the regional newspaper, later worked in the Party and for the Soviet authorities, was the secretary of the Tuva Party Committee and retired with the rank of first deputy chairman of the Council of Ministers of the Tuva ASSR. Also he led the Tuvan State Archives and spent six years as editor of the newspaper Pravda; wrote the novels Time and People, Feather of the Black Vulture (2001), Tannu Tuva: the Country of Lakes and Blue Rivers (2004).

Mother — Alexandra Yakovlevna Shoygu (née Kudryavtseva) (1924–2011). Born in the village of Yakovlev in the Oryol Oblast. From there, shortly before the war, her family moved to Kadievka (now Stakhanov) in the Luhansk Oblast, Ukraine. A zootechnician, Honored Worker of Agriculture of the Republic of Tuva, until 1979 – Head of the Planning Department of the Ministry of Agriculture of the Republic, was repeatedly elected deputy of the Supreme Soviet (parliament) of the Tuva ASSR.[17]

Granduncle — Seren Kuzhuget, commander of the Tuvan People’s Revolutionary Army from 1929 to 1938.[18]

Daughters — Yulia[21] (1977) and Ksenia (1991).[20] According to Alexei Navalny, Ksenia is suspected to be a figurehead of her father in the ownership of a palace in the outskirts of Moscow, valued at about £12 million. In 2012, the estate was transferred to the formal ownership of Yelena Antipina.[22]

Sergey Shoygu enjoys studying the history of Russia of Peter the Great‘s time and 1812–1825 (French invasion of Russia and the Decembrist revolt).[23]

Shoygu is fond of sports and is a fan of the CSKA Moscow hockey team. He also enjoys football and is a fan of Spartak Moscow. In March 2016, together with Sergey Lavrov, Shoygu presented the Russia People’s Soccer League, with aims to unite fans of the sport from all over Russia.

Shoygu collects Indian, Chinese, and Japanese swords and daggers. He also enjoys bard songs and plays the guitar. He does water color paintings and graphics. He also enjoys collecting old pieces of wood, some of which he has shown to Putin.[24][25][26]

Encyclopedia of the most significant people of our time